Simon Says: Year of the Pig

In these Spotlight discussions, we feature the individuals that make up our ecosystem – what they each bring to our community, and what they gain from it.

My name is Josef Radinja. I work for Willis Towers Watson and I’m the Industry Leader for government and education. 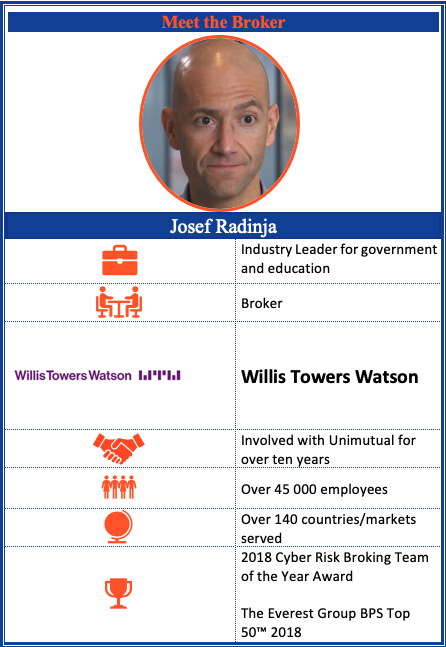 Tell us about Willis relationship with Unimutual

We’ve been placing our university clients with Unimutual for a number of years, well in excess of 10 years. We act as a broker obviously on behalf of the clients so we engage with Unimutual in terms of a broker-insurer relationship.

How important is the relationship between brokers and risk protection providers?

I think it’s symbiotic because the brokers need to work with insurers and insurers need to work with brokers, and at the end of the day brokers are advocates for their clients. So the better their relationship, the better the outcome. I think risk management is very difficult to measure in terms of a financial metric because it’s not like it makes an organisation money. How do you put a financial measure on an event not happening? It’s difficult. But I think one of the things that Unimutual does really well is it’s not just about insurance or risk transfer. It’s trying to work with its members around getting their risk management right which means that they don’t pay out a claim but it also protects its members in terms of their operations and reputation. So I think that focus by Unimutual is really key and it’s one of the points it’s different to what the open market insurers provide.

How do you manage the conversation around cost vs value?

Pricing is a very short-term approach and tunnel vision in some regards. I think when you look at insurance, again it’s around an outcome that you want in the event of something bad happening. So it’s around behaviour by an insurer, it’s around consistency of an insurer, both in terms of coverage and just being there in the longer term. But I think it’s also important that the insurer understands the industry and the risks of who they’re providing cover for. And Unimutual certainly does that in terms of its members. You don’t want an insurer saying, “Well I didn’t think you did that and I didn’t think I’d have to pay for that.” So understanding the industry is really important.

You don’t want an insurer saying, “Well I didn’t think you did that and I didn’t think I’d have to pay for that.” So understanding the industry is really important.

What differentiates Unimutual from other risk protection offerings?

I think the primary difference is going to be what their motives are in terms of why they exist. Obviously as a member organisation it’s for the benefit of members. With an open market insurer it’s to make profit for shareholders. So I think when you look at the financial results that Unimutual has, any surpluses somehow go back to members either in reduced premiums or increased focus on risk management. It’s consistent with its cover, pricing and approach but also understands who its clients are, and what their exposures are. And that only comes because they their mandate, if you will, is so tied around only insuring university and research type entities. So I think again that’s what makes the Unimutual proposition quite unique.

It’s consistent with its cover, pricing and approach but also understands who its clients are, and what their exposures are.

What trends do you see in the Insurance market?

There’s probably two key issues that I see that are upcoming in terms of trends. One is insurer merger and acquisition activity. We’ve seen quite a bit of that and I think that will continue. I think that can only be detrimental to our clients because it reduces competition and therefore reduces the ability to create competitive friction. The use of big data is another pertinent issue for insurers particularly because they use that as a bit of a predictive tool which is obviously how they underwrite. But from a client side it enables them to be … to utilise that tool as an enabler. So how much risk can I take? How much do I transfer? How much cover do I need? So it enables them to think and behave like an insurer would, albeit for their own benefit.

What are the key emerging risks for the higher education sector?

I think the biggest risk is political. There seems to be this short-term view from politicians around most things including education. Depending on the popular view at the time they will change their attack on particular funding models. And we’ve seen that happen with the schools at the moment and both sides of the political fence have different views around how they’re going to fund universities. And I think that short term political landscape is a real risk to universities. Yeah, AI is one of those emerging risks I think. Well it’s an emerging issue, the question is, “Is it going to be there to reduce the risk or is it going to introduce new risk?” I think we’ll see how that goes but I think it is … it’s going to happen regardless. But it’ll certainly change a number of jobs that are out there for everyone.

I think the other aspect which is always on a risk registry for large organisations is reputation. It’s such an intangible. When it’s been impacted you can really say what the financial downside is but how do you protect it? How do you promote it? I think that’s something a lot of entities are grappling with. So over time I’m not sure if that’ll change or not but I think that’s certainly front of mind.

Do you see any changes or developments in risk management strategies?

Has the partnership with Unimutual changed how your clients manage risk?

I think just being part of a mutual means a different mindset from the university. They don’t view them as just a provider of insurance. There’s a view that they’re in the mutual with other universities so they perhaps have a less commercial view, and more one around mutuality, and what’s best for the sector. So I think it really drives that different attitude and approach with universities.

Note: Since this interview was filmed Josef Radinja has started a new position as CEO at Avatar Brokers.

We previously spoke to Member, Fleur Reid, from the University of Canberra – read her responses here.