Bots, boardgames and building the future at the UA Conference 2018

Looking into the near distance: the insurance market in 2018 and beyond

Bots, boardgames and building the future at the UA Conference 2018

Last month we attended the annual 2018 Higher Education Conference by Universities Australia, alongside many of you. As ever, the conference was a great forum for industry discussion with wide-ranging opinions, challenges to solve, and promising developments shared and debated by the 1000+ delegates that attended.

Held 28 February-2 March in Canberra, this year’s program ran the full gamut of topics from Future Disruption to Indigenous Mobility to Philanthropy in times of crisis – via the Death Star, Mad Max, Frankenstein, the Hunger Games, the Flintstones and the Jetsons. Despite this range of images, from cavemen to post-apocalyptic desert, the conference was very much about looking ahead. The keynote address, by Bruce Reed co-chair of the Aspen Institute Future of Work Initiative, kicked the event off with a focus on the future workforce – and in particular, the potential impact of AI and automation on society.

In a workforce increasingly exposed to the development of AI, the question is no longer ‘what do you want to be when you grow up’, but ‘what will you be when the robots grow up?’. Reed posited that the best vaccination for the future disruption of work was to fortify the future of learning, with 19 out of the 30 fastest growing jobs requiring a University education. In addition, the symbiosis of education and business must strengthen, as the forces that disrupt one will affect the other, and vice versa.

“What do you want to be when the robots grow up?”

And, while Australia is arguably the world’s foremost user of robotics and automation thanks to the mining and agriculture sectors, as stated by University of Sydney’s  Professor Hugh Durrant-Whyte, there is plenty else that can be done to ready ourselves for the future. More than one voice declared that jobs won’t disappear, they will change. Our future workforce needs to be agile; equipped to adapt to change and think both critically and creatively. For examples of digitally-wrought change, have a look at our recent article on the impact of technological disruption.

In the spirit of fortifying the future of education, Dr. Alan Finkel, Australia’s Chief Scientist, brought us the memorable boardgame ‘Faculty’, where every player is a Vice Chancellor entrusted with driving up their University’s rankings in a range of areas such as research and academic excellence. The game is rendered more complex and, dare we say, realistic, by the backdrop of chance provided by TEQSA cards and Government Policy cards; winners in the game, as in life, are those who manage both the strategy and the chance.

Money on the mind

If only Australia’s Universities were playing with Monopoly money. The freeze on funding was top-of-mind for conference attendees, particularly for consideration around its potential impact on inclusivity. In his Ministerial address, Minister for Education and training, Simon Birmingham emphasised that the freeze will not affect Australia’s top-tier Universities”, while Deputy Leader of the Opposition and Shadow Minister for Education and Training, Tanya Plibersek had the chance to put forward her competing policy statements the next day. Many evidenced concern around the disproportionate effects of the funding freeze and lowering of the repayment threshold on the most disadvantaged students on lower tier Universities, as well as about inclusiveness under the current status quo. For example, Professor Jonathan Powles of University of New England posited that current university curriculums are designed “within a metropolitan, middle class, on-campus, full-time paradigm”. Rationing enrolment, some argued, was a literally exclusive action contrary to the goals of increasing access and opportunities for all.

This diversity of the student body will be increasingly important, aside from the ethical reasons, as a further solution to workplace disruption. As mentioned in the plenary on ‘Maintaining Core Values while Staying Ahead of Disruption’, diversity is one of the key enablers for business transformation – and needs to be a priority from leadership down. In part of this session, Ahmed Fahour noted that while 80% of the e-commerce market was female, the percentage of women at Aus Post management levels was barely scraping double-digits. Fahour shared his experience as former CEO of Australia Post – a business that took two centuries to reach its peak volumes (in 2008) of letters sent in Australia, but only a further 8 years for those volumes to halve.

Aus Post may have faced a very rapid come-to-Jesus moment, but every industry is set to experience digital disruption in some way, if it hasn’t already. Aus Post’s business model change is an enlightening example: instead of romanticising the past, Fahour argued, organisations should take a more astute look at current customer needs in order to innovate – or die.

Diversity was a recurring topic, and thinking around how to address marginalisation and boost inclusivity gave us ‘Manopoly’ – the game that plays you – from Professor Deb Verhoeven of University of Sydney. Exploring the ‘Daversity’ problem within Australian research, Verhoeven used big data to illustrate the gender inequality perpetuated by the networks of ARC LIEF grant recipients. We also listened in interest to the Gender Equality Recruitment Best Practice Guidelines launched and presented by Universities Australia’s Executive Women Group.

There is no doubt that Higher and University education will change in coming years, but its importance to people’s lives and careers, and to the economy, has never been greater. In her address to the National Press Club, Universities Australia Chair, Professor Margaret Gardner of Monash University proposed that boosting engagement between Australia’s universities and its businesses could add $10 billion a year to the country’s GDP – increasing from the current $19.4 billion contribution to a whopping $30 billion p.a. Gardner, among others that spoke at the conference, argued that higher education insulates the Australian economy against global upheaval and protects social cohesion. She went on to state that “Opportunity for all is our greatest insurance policy against despair and disaffection”.

As well as partnering with businesses, Universities should look to strengthen their partnerships with their students. There were calls for students to have a greater voice, with the Never OK campaign – co-led by VC and students in partnership – held up as an example.

Students and staff alike exercised their voice in calls for their organisations to divest from fossil fuels. For more information on how such protests can affect your organisation, you may wish to read our recent risk articles on civil unrest and student activism.

Student health, and mental health in particular, was also a key theme requiring ongoing consideration, with an astonishing 41% of those higher Education students considering an early departure doing so due to health and stress, according to the Australian 2016 Student Experience Survey. Student safety, especially regarding sexual assault, is also a perennial concern – if it is for you, you may want to revisit our emerging risk report, sexual assault checklist or our article summarising last year’s AHRC report.

In our own session on the Wednesday morning, we discussed the importance of protecting today’s research for tomorrow, against loss and incidence, as in the sad case of thirty years of blood samples from Tasmanian marsupials that could have given us insight into one of the world’s few known transmissible cancers, but which were lost due to poor storage conditions and an unfortunate power failure.

We discussed the deep value of data. We have been gathering data – both hard numbers and firsthand experience – on this sector for nearly three decades. The usefulness of such datasets – in our case, for accurately predicting risk financing costs and therefore collecting only the money we need from you, and no more; for provisioning for current and future claims; and for pinpointing emerging loses and trends and forecasting future ones – cannot be overstated. What the data shows us, above all, is that the Mutual’s efforts must continue. Promoting engineering solutions is still vital, since well implemented engineering solutions have the potential to significantly reduced incidences of lost research samples – thereby protecting further important data.

Secondly, data and experience clearly tells us that cultural change is equally important, for example in this case communicating to the research community about protecting research integrity via the storage of samples. Cultural change is the trickiest to engineer, often the most stubborn and the most risky – but it is the lever that can bring about the greatest impact by far.

We are already greatly looking forward to our own conference, now set for 5-7 September, and hope to see you all there. Please save the date and keep an eye out for registrations which will open soon. 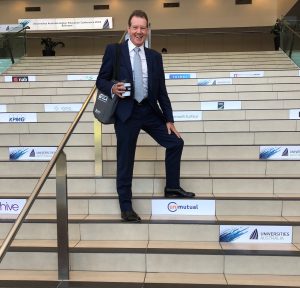